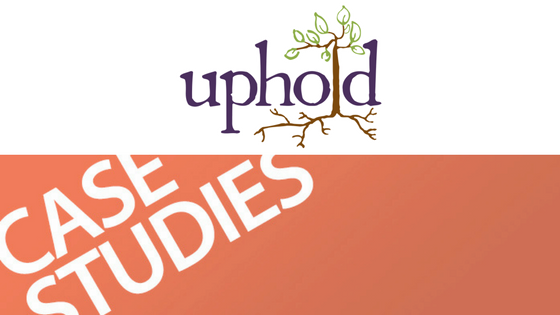 Non-Profit Organization Builds a Team from an Idea

Uphold is a non-profit action cooperative whose mission is to empower non-profit and community based organizations by providing mission driven technical assistance and tailored metrics  that support program development and monitoring to promote accountability, sustainability, and collective impact.When founder Rashid Njai first encountered Raw Shorts he was in the early idea phase of Uphold. He had the vision for what Uphold could be but did not have the team to get him there. He used Raw Shorts to capture the essence of his vision into an easy to understand and very shareable format. This enabled his friends and family to understand his vision and easily share it with their networks. Through this grassroots effort, Rashid was able to build a team of 10 people who now work together with him on Uphold projects.

“Raw Shorts is great, especially for companies who are start-ups, who don’t have a lot of resources, and are really trying to get people on-board and build their brand.”

Uphold started as an idea. No money, no technological know-how, no team. The challenge was to take a complex idea and make it simple so that people could understand it and Rashid could engage his network, and their networks, to activate the necessary people and talent for the organization to be born and thrive. How could he package the idea into a easy to understand, captivating format that was easy to share? Enter Raw Shorts.

How did Raw Shorts Help:

Video has always been a powerful medium for telling stories and engaging people but it has historically been preventatively expensive. Raw Shorts has totally changed the paradigm by creating a simple animated video editing interface and combining it with professionally designed templates. This enabled Uphold to boil their vision, mission, and value proposition down into a one minute animated video that looked professionally done and was terrifically easy to share. Using Raw Shorts the message of Uphold’s vision went far and wide, and along the way found a number of people willing to volunteer their efforts and ultimately join the team.

“When you have really complex ideas and need to simplify them and boil them down, Raw Shorts does that.”

Uphold’s video was posted on Facebook and received 2,500 organic views in the first 3 months! From this outreach Uphold was able to find volunteers with web development know-how who believed in their vision to help them build a website. Now Uphold is a thriving non-profit with a team of 10 people.

Uphold’s next videos are going to be about process. So that when new organizations and people are brought into the network, they know exactly what to expect.

Hi! I'm Antonio and I'm here to post some really cool stuff for you. If you have any ideas or any requests you can find me Twitter: @otalvaro